Dato’ Simon Foong Choong Heng (“Dato’ Simon”) was appointed to the Board on 21 October 1994. He holds a Bachelor of Arts (Honours) degree in Business Studies, from Ulster Polytechnic, now part of Ulster University, United Kingdom, obtained in 1981. He also completed the Senior Management Development Program by Harvard Business School Alumni Club of Malaysia in 1994.

Dato’ Simon is a member of the Audit and Risk Management Committee (“ARMC”) and Nominating and Remuneration Committee (“NRC”).

He attended all the six (6) Board Meetings held during the financial year ended 31 December 2019.

Dato’ Simon began his career with PMI Compex EDP (M) Sdn Bhd, a company involved in the distribution of Apple computers, where he was a Marketing Manager from 1982 to 1983. In 1984, he joined Jurudata Sdn Bhd as their Sales and Marketing Manager before leaving in 1991 to join Komtel Sdn Bhd (“Komtel”) as its General Manager in charge of the management of business operations, dealership and expansion of its business.

Dato’ Simon was previously a committee member for the Cosmetic, Toiletry and Fragrance Association of Malaysia; the Vice Chairman and Trustee of the PT Foundation (previously known as Pink Triangle Sdn Bhd); the immediate past President of the Malaysian Association of Amusement Theme park and Family Attractions; and a past member of the Advisory Board of Kuala Lumpur Tourism Bureau.

In December 2018, Dato’ Simon was awarded Tatler’s Diamond of Excellence award by Malaysia Tatler, to recognise the positive impact he made in the country’s retail and tourism industry and his efforts in helping to elevating the industry standards over the years. 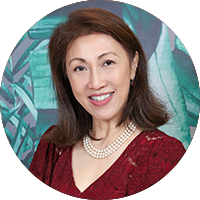 Datin Mina Cheah Kim Choo (“Datin Mina”) was appointed to the Board on 21 October 1994. She obtained her Bachelor of Science (Honours) degree in Computational Science and Management Studies from University of Leeds, UK in 1982.

Datin Mina has more than 30 years of experience, both in retail as well as the cosmetics and toiletries industry. She is instrumental in providing strategic vision and growth strategies to our Group as well as ensuring the successful implementation of our Group’s strategy and growth plans. Upon her return to Malaysia in 1982, she worked at Hewlett Packard from 1983 to 1984 as a Systems Engineer before starting The Body Shop franchise business in West Malaysia when she opened the first The Body Shop point-of-sale in December 1984. Since then she has grown our Group from a single store to a multi-million ringgit business. She continues to actively shape the strategic direction and development of our Group’s business, and promote the Group’s values on environment, human rights and women’s rights.

Datin Mina was a member of the Board of Trustees of the Malaysian AIDS Foundation from 2000 to 2012 and held the position of Honorary Secretary from 2006 until 2012. She was invited to participate in the Malaysian Government Transformation Programme in 2012 and became the Laboratory Leader who was instrumental in developing the National Key Economic Areas for Wholesale and Retail. She is currently the Honorary Auditor for the Bukit Bintang Kuala Lumpur City Centre Tourism Association, a position she held since 2017.

Datin Mina accepted the Prime Minister’s Corporate Social Responsibility Award on behalf of Rampai-Niaga in 2007 for its outstanding work in the small company category and again in 2009 for the contributions made towards the empowerment of women. In 2014, Forbes named Datin Mina as one of its ‘Heroes of Philanthropy’. More recently, her contributions were again recognised when she was honoured with the Patron’s award at the Malaysian AIDS Foundation Tun Dr Siti Hasmah Award 2018 for her dedicated long service with the Malaysian AIDS Foundation. Her corporate philosophy of active citizenship and community care is evident in the campaigns that our Group has initiated and it exemplifies her belief of “business as a force for good”.

In the last 10 years, Datin Mina climbed to Base Camp Everest, summited Mount Kilimanjaro, trekked along the Kalahari Desert and rafted through 41 rapids on the Zambesi River. These achievements demonstrate Datin Mina’s entrepreneurial character in taking up new challenges, and steadfast leadership of our Group. Molly Fong Hui Sain (“Molly”) was appointed to the Board on 27 February 2019. She obtained her General Certificate of Education Advanced Level in 1990 and subsequently she pursued the Institute of Chartered Secretaries and Administrators (“ICSA”) programme and was admitted to the ICSA in 1999. She also obtained a Master of Business Administration degree from The University of Nottingham, UK, in 2013. She was named the University of Nottingham - Malaysia Campus 2013 “Alumnus of the Year” at the Alumni Laureate Award ceremony held in Kuala Lumpur in 2013.

She started her career with Prosell Sdn Bhd, a below-the-line advertising agency as an Administration Executive in 1992. She left Prosell Sdn Bhd in 1995 to join Rampai-Niaga as a Communications Executive. From 1995 to 2003, she worked in various departments within Rampai-Niaga, from marketing and commercial, brand management, visual merchandising and store development, retail operations and sales management, to business development and was promoted as our General Manager in 2003. In 2009, Molly played a vital role to lead the team in starting up the operations in Vietnam. She was appointed as the Chief Executive Officer of Rampai-Niaga in 2011, and subsequently in January 2019, she assumed her present role as our Chief Executive Officer. Currently, Molly is responsible for the overall strategic direction and management of the Group’s business operations.

Throughout her tenure with our Group, Molly’s passion for The Body Shop brand values and her belief in “profits with principles” remain steadfast. She continues to ensure that positive social and environmental change remains high on the agenda of our Group. 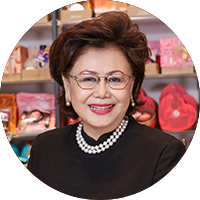 Dato’ Maznah is the Chairperson for both the ARMC and NRC.

Dato’ Maznah began her career with Amanah Merchant Bank Berhad in 1979, where she spent 13 years as an officer in corporate banking and project financing and later a Manager in the corporate finance department. In 1992, she joined Master Carriage (Malaysia) Sdn Bhd as the Executive Director of Corporate Affairs. She was also appointed as a director of Diversified Resources Berhad (“DRB”) (now known as DRBHICOM Berhad (“DRB-HICOM”) in 1992 of which she held the directorship until 2005.

She served on the board of UOB Bank (Malaysia) Berhad from 2006 to 2007. Thereafter she joined Hong Leong Financial Group Berhad as the Head, Corporate Finance and Principal Investment from 2007 to 2008. She then moved to Kenanga Investment Bank Berhad in 2009 as the Executive Vice President, Corporate Finance Advisory.

In 2011, she left Kenanga Investment Bank Berhad to join SCS Global Advisory (M) Sdn Bhd (formerly known as Moore Stephens AC Advisory Sdn Bhd) as the Chairman, a position she holds till to-date. In 2012, she joined Sona Petroleum Berhad (a special purpose acquisition company which is now dissolved) as the Executive Director and Chief Financial Officer up till dissolution of the company in 2019. In addition, she was formerly a Chairman of Uni. Asia General Insurance Berhad (now known as Liberty Insurance Berhad) group of companies and Uni. Asia Life Assurance Berhad (now known as Gibraltar BSN Life Berhad). Tengku Datin Paduka Setia Zatashah Binti Sultan Sharafuddin Idris Shah (“Tengku Zatashah”) graduated with a Bachelor of Arts (Honours) degree in Spanish with French Studies from Middlesex University, UK in 1997, and subsequently she obtained the Certificate of Language and French Civilisation from Sorbonne University, Paris, France in 2001. Tengku Zatashah then obtained a Master’s degree in International Relations and Diplomacy and graduated Magna Cum Laude from the American Graduate School in Paris, France in 2007. She completed the Women Directorship Programme organised by the NAM institute for the Empowerment of Women Malaysia in 2013. In 2014, she completed the Finance for Executives Programme from Insead Business School in Singapore.

Tengku Zatashah is a member of the ARMC and NRC.

She attended five (5) out of the six (6) Board Meetings held during the financial year ended 31 December 2019.

Tengku Zatashah started her career as an Accounts Executive Trainee in BDDP Barcelona, an advertising agency in Barcelona, Spain in 1995. In 2001, she returned to Malaysia and joined the New Straits Times, Malaysia, as a feature journalist from 2001 to 2003. Tengku Zatashah subsequently moved to Paris, France in 2004 and served until 2009 as the International Corporate Communications Manager of L’Oréal SA at its headquarters in Paris, France.

In 2009, she left L’Oreal SA and co-founded Originalo Sdn Bhd, a leisure travel gift box company and served as the Managing Director until 2014. From 2009 to 2014, she was also a contributing columnist for The Edge, Malaysia in its “Princess @work” column, as well as The Peak Malaysia in its “Jetsetter” and “Design Diary” columns.

She has been the Chairperson of Light Cibles Sdn Bhd, an international lighting design consultancy firm since 2012, and a Senior Advisor of Klareco Communications (formerly Bell Pottinger Malaysia), a regional communications agency since 2015, both positions of which she holds till to-date.

In 2017, Tengku Zatashah was awarded France’s highest award Legion d’Honneur, as Chavalier Legion d’Honneur (Knight of the Legion of Honour) signifying recognition from the French government for her contribution as the President of Alliance Francaise de Kuala Lumpur. In Malaysia, she was awarded Ikon Wanita (Woman Icon) in the Year of Women Empowerment 2018 campaign launched by the Ministry of Women, Family and Community Development, Malaysia. He is the alternate director to Dato’ Simon, the Non-Independent Executive Chairman of the Company. He attended a Board meeting held during the financial year ended 31 December 2019.

Daryl Foong has 10 years of experience working in the fastmoving consumer goods, retail and entertainment industries. He began his career as a Public Relations Executive in RAPR Mileage Communications Sdn Bhd in 2009 where he was responsible for public and media relations client servicing. Subsequently, he left to join L’Oréal Malaysia Sdn Bhd (“L’Oréal Malaysia”) as Product Executive in 2010.

In 2012, he left L’Oréal Malaysia to join Rampai-Niaga as Marketing Manager. In 2015, he was promoted as the Digital and Loyalty Manager. In this role, he was involved in implementing and managing our Customer Relationship Management loyalty programme, online store, our brand social media activities, public relations, and advertising campaigns across all platforms. He was subsequently re-designated to be Rampai-Niaga’s Business Development Manager in 2015 and his portfolio expanded to include identifying and establishing new profitable business locations, managing the company’s exit from unprofitable locations, managing rental renewals, maintaining a working relationship with the landlords and mall management, maintaining and managing the leasing process, and overseeing leasing budget and store profitability.

In 2016, Daryl Foong left Rampai-Niaga to join Aquawalk as the Head of Sales and Marketing Department overseeing the company’s Education, Visual, and Creative departments. He was promoted as the General Manager in 2018 and appointed to his current position in April 2019 as an Executive Director of Aquawalk. He is responsible for overseeing Aquawalk’s overall business activities and financial performances.